Our Church Council provides volunteer service to carry out the mission and ministry of our church. Our pastor and music director provide spiritual leadership in worship and our community.

Rev. Samuel Pullen was born in Minnesota and grew up in Iowa, where his parents provided an ecumenical Christian upbringing as members of Methodist, Presbyterian, and Lutheran churches. Since his teenage years Samuel has been putting his faith in action and seeking justice as a student activist, union & community organizer, and a Christian minister.

Pastor Sam brings a variety of gifts to his calling as pastor at Community Congregational United Church of Christ of Los Alamitos. Building community is essential for churches, a skill that Sam has developed while working as a faith-based organizer for Clergy and Laity United for Economic Justice (CLUE) and the PICO National Network (People Improving Communities by Organizing). Progressive evangelism is key to Sam’s vision for ministry, which he practiced while helping to launch (a)Spire ministries at First Congregational Church of Pasadena. Music brings people together and stirs the soul, so don’t be surprised if you see Pastor Sam singing songs or playing guitar or violin during worship.

One of the greatest blessings in Samuel’s life is being married to Elizabeth González, who works as a bilingual teacher at a public school in Culver City. Samuel is fluent in Spanish and plays violin with mariachi groups, where he is commonly known as “El Mariachi Gringo.” Rev. Samuel Pullen is engaged in a ministry of transcending borders as a community organizer, musician, and spiritual practitioner. 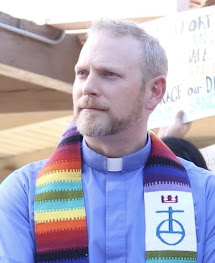